“Miss Nalgas USA 2022” is a performance artwork. Nalgas means buttocks in Spanish. The artwork is inspired by Arlene Davila’s book Latinos, Inc.: The Marketing and Making of a People and her discussion on the “commodification of ethnicity” and the “re-authentication of U.S. minorities in terms of the ‘right’ way of being an ‘ethnic.’” This artwork uses humor to encourage dialogue about ethnic identity, body image, and aging. The performance features contestants vying for the honor of Miss Nalgas USA 2022. The artist has invented this beauty pageant which focuses on self-identifying women over 50. There is a term for what happens to women over 50 in society; it is called the Invisible Woman Syndrome. Coahuiltecan/Spanish artist, Rosemary Meza-DesPlas is the character and pageant winner Miss Refried Rosi Frijoles. “Miss Nalgas USA 2022” pokes fun at the pageant concept and its role in promoting stereotypes of beauty and the feminine American identity. Dual identity, Latina American, leads to contrary beauty standards being foisted upon the Latina body. The dialogue of the performance incorporates common misconceptions about New Mexico and references specific geographic locations in the Four Corners.

The installation “The Invisible Woman Syndrome” presents a dichotomy of presence and absence. Ethnicity and gender are suggested by corporeal form while omission frames the imaginary character of Rosi Refried Frijoles. The first artwork in a new series titled Miss Nalgas USA serves as a prelude to an upcoming performance artwork: a beauty pageant for the self-identifying Latina over fifty. This installation is the breakfast nook of pageant winner Rosi Refried Frijoles.

Names of Latina activists are hand-embroidered upon deconstructed/reconstructed soft bra sculptures. By accentuating select intergenerational activists, the artist underscores the lack of intersectionality in feminist history. Present-day activists are included as a nod to the future: advocacy to effect change is continuous. Set upon the table are signifiers of ethnic identity, ethnic authenticity, and colorism. Who is an authentic Latino/Hispanic? And— to paraphrase, writer Arlene Dávila: we don’t all eat beans. The framed watercolor This is Not a Taco humorously and simultaneously mocks René Magritte’s The Treachery of Images and “Taco Tuesday.” 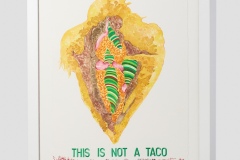