Marching is the simplest use of the physical body as a political force. Affected by the tumultuous past year of demonstrations, I chose to re-examine the history of marches. In particular, protest marches led by women. Feminine bodies reflect the varying tempos and pauses of a demonstration; therefore, they illustrate the visual structure of marching. Emphasizing the vulnerability of the physical body during a demonstration, figures are depicted nude. The unseen becomes visible – it is a risky exposure. Art historically, partially nude women sometimes convey political symbolism. Eugene Delacroix’s Liberty Leading the People depicts Liberty striding forward over fallen men. A robust figure, with breast exposed, holds high the French flag. Incarnation of the French Republic reveals her breasts to inspire political feelings of nationalism: the breast becomes a symbol for freedom. During a demonstration, the individual is subsumed by the larger group. However, when the protest is over – is political activism embraced as an ongoing individual practice? How much power does the individual have? At the beginning of the 20th century, Mary G. Harris Jones, aka Mother Jones, organized marches to highlight the absence of child labor laws and the plight of women workers. When asked about her socio-political organizing work, she replied, “I’m not a humanitarian, I’m a hell-raiser.” 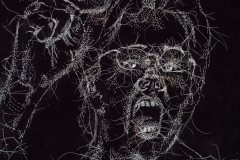 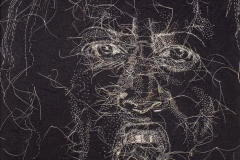